This is a continuation of my earlier set theory post. In this post, I’ll describe the next three axioms of ZF and construct the ordinal numbers.

As review, here are the natural descriptions of the five axioms we covered in the previous post.

Axiom 1 (Extensionality) Two sets are equal if they have the same elements.

which contains no elements

containing only those two elements. (It is permissible to have

is a set then so is

Axiom 4 (Union) Given a set

, the union of the elements of

Axiom 5 (Power Set) Given any set

I’ll comment briefly on what these let us do now. Let

Now let’s drop the formalism for a moment and go on a brief philosophical musing. Suppose we have a universe

is) where the only sets are those which appear in some

. You might then see, in fact, that the sets in

actually obey all five axioms above. What we’ve done is provide a model for which the five axioms are consistent.

2. The Axiom of Foundation

We’re about to wade into the territory of the infinite, so first I need an axiom to protect us from really bad stuff from happening. What I’m going to do is forbid infinite

Axiom 6 (Foundation) Loosely, there is no infinite chain of sets

You can see why this seems reasonable: if I take a random set, I can hop into one of its elements. That’s itself a set, so I can jump into that guy and keep going down. In the finite universe

, you can see that eventually I’ll hit

, the very bottom of the universe. I want the same to still be true even if my sets are infinite.

This isn’t the actual statement of the axiom. The way to say this in machine code is that for any nonempty set

in machine code (yet). Nevertheless this suffices for our axioms.

There’s an important consequence of this.

Proof: For otherwise we would have

is considered a natural number.

Now for the fun part. If we want to encode math statements into the language of set theory, the first thing we’d want to do is encode the numbers

in there so that we can actually do arithmetic. How might we do that?

and let these correspond to the natural numbers. What sets should we choose? Well, there’s only one set of size

, so we begin by writing

. If we want to construct a three-element set and we already have a two-element set, then we just need to add another element to

that’s not already in there. In other words, to construct

I just need to pick an

. By the earlier theorem, we always

Now the cat’s out of the bag! We define

And there you have it: the nonnegative integers. You can have some fun with this definition and write things like

now. Deep down, everything’s a set.

We’re currently able to do some counting now, because we’ve defined the sequence of sets

. This sequence is related by

Some properties of these “numbers” I’ve made are:

A set which is both transitive and well-ordered by

is called an ordinal, and the numbers

are precisely the finite ordinals. But now I’d like to delve into infinite numbers. Can I define some form of “infinity”?

To tell you what a set is, I only have to tell you who its elements are. And so I’m going to define the set

We just tacked on an infinity at the end by scooping up all the natural numbers and collecting them in a set. You can do that? Sure you can! All I’ve done is written down the elements of the set, and you can check that

is indeed an ordinal.

Well, okay, there’s one caveat. We don’t actually know whether the

I’ve written down is a set. Pairing and Union lets us collect any finite collection of sets into a single set, but it doesn’t let us collect things into an infinite set. In fact, you can’t prove from the axioms that

For this I’m going to present another two axioms. These are much more technical to describe, so I’ll lie to you about what their statements are. If you’re interested in the exact statements, consult the lecture notes linked at the bottom of this post.

be a function on a set

. Then the image of

Axiom 8 (Infinity) There exists a set

With these two axioms, we can now write down the first infinite ordinal

But now in the same way we constructed

, we can construct a set

Well, can we go on further? What we’d like is to define an “

”, which would entail capturing all of the above elements into a set. Well, I claim we can do so. Consider a function

. (Strictly, I have to prove that set-encoding of this function, namely

, is actually a set. But that’s put that aside for now.) Then Replacement tells me that I have a set

From here we can union this set with

to achieve the set

. And we can keep turning this wheel repeatedly, yielding the ordinal numbers. 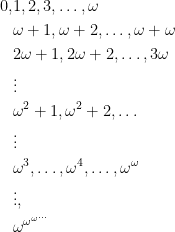 I won’t say much more about these ordinal numbers since the post is already getting pretty long, but I’ll mention that the ordinals might not correspond to a type of counting that you’re used to, in the sense that there is a bijection between the sets

I’ll conclude this exposition on ZFC with a few last axioms. First is the axiom called Comprehension, though it actually can be proven from the Replacement axiom.

be some property, and let

be a set. Then the notion

is a set. More formally,

Notice that the comprehension must be restricted: we can only take subsets of existing sets. From this one can deduce that there is no set of all sets; if we had such a set

, then we could use Comprehension to generate

So anyways, this means that we can take list comprehensions.

Finally, I’ll touch a little on why the Axiom of Choice is actually important. You’ve probably heard the phrasing that “you can pick a sock out of every drawer” or some cute popular math phrasing like that. Here’s the precise statement.

be a set such that

. Then we can define a function

is called a choice function; given a bunch of sets

, it chooses an element

. In other words, for any

In light of the discussion in these posts, what’s significant is not that we can conceive such a function (how hard can it be to take an element out of a nonempty set?) but that the resulting structure is actually a set. The whole point of having the ZF axioms is that we have to be careful about how we are allowed to make new sets out of old ones, so that we don’t run ourselves into paradoxes. The Axiom of Choice reflects that this is a subtle issue.

So there you have it, the axioms of ZFC and what they do.

Thanks to Peter Koellner, Harvard, for his class Math 145a, which taught me this material. My notes for this course can be downloaded from my math website.

leads to the well-ordering for the ordinals.

I am a math olympiad coach and a PhD student at MIT. View all posts by Evan Chen (陳誼廷)