I think this post is more than two years late in coming, but anywhow…

. The one-sentence description is that these are “integers/rationals carrying full mod

The first four sections will cover the founding definitions culminating in a short solution to a USA TST problem.

is always a prime. Much of this is based off of Chapter 3A from Straight from the Book.

Before really telling you what

are, let me tell you what you might expect them to do.

Let me expand on the first point. Suppose we have some Diophantine equation. In olympiad contexts, one can take an equation modulo

to gain something else to work with. Unfortunately, taking modulo

loses some information: (the reduction

is far from injective).

If we want finer control, we could consider instead taking modulo

, rather than taking modulo

. This can also give some new information (cubes modulo

, anyone?), but it has the disadvantage that

isn’t a field, so we lose a lot of the nice algebraic properties that we got if we take modulo

One of the goals of

-adic numbers is that we can get around these two issues I described. The

-adic numbers we introduce is going to have the following properties:

So, you can think of

To be more concrete, I’ll give a poster example now:

, show the value of

does not depend on

Here is a problem where we clearly only care about

-type information. Yet it’s a nontrivial challenge to do the necessary manipulations mod

(try it!). The basic issue is that there is no good way to deal with the denominators modulo

is not even an integral domain).

Such an identity makes no sense over

for converge reasons, but it will work fine over the

. I promised earlier that a

-adic integer will let you look at “all residues modulo

” at once. This definition will formalize this.

-adic integer is a sequence

-adic integers forms a ring under component-wise addition and multiplication.

, so we can view each ordinary integer as

On the other hand, there are sequences of residues which do not correspond to any usual integer despite satisfying compatibility relations, such as

which can be thought of as

In this way we get an injective map

which is not surjective. So there are more

(Remark for experts: those of you familiar with category theory might recognize that this definition can be written concisely as

where the inverse limit is taken across

is an integral domain.

Here is another way to think about

”. As in the example earlier, every usual integer can be written in base

More generally, given any

, we can write down a “base

” expansion in the sense that there are exactly

. Continuing the example earlier, we would write

and in general we can write

, such that the equation holds modulo

. Note the expansion is infinite to the left, which is different from what you’re used to.

Thus you may often hear the advertisement that a

-adic integer is an “possibly infinite base

expansion”. This is correct, but later on we’ll be thinking of

in a more and more “analytic” way, and so I prefer to think of this as a “Taylor series with base

”. Indeed, much of your intuition from generating functions

is a field) will carry over to

Here is one way in which your intuition from generating functions carries over:

is invertible if and only if

Contrast this with the corresponding statement for

, so clearly not invertible. Otherwise,

, so we can take an inverse

are themselves compatible, the element

We claim the earlier example is actually

Indeed, multiplying it by

(Compare this with the “geometric series”

. We’ll actually be able to formalize this later, but not yet.)

is an integer for

The earlier proposition implies that

(among other things); your intuition about what is an “integer” is different here! In olympiad terms, we already knew

made sense, which is why calling

an “integer” in the

-adics is correct, even though it doesn’t correspond to any element of

With this observation, here is now the definition of

is an integral domain, we let

denote its field of fractions. These are the

is “Laurent series with base

”, and in particular according to the earlier proposition we deduce:

Every nonzero element of

is uniquely of the form

Thus, continuing our base

are in bijection with “Laurent series”

representations of elements of

can be thought of as the same as usual, but extending infinitely far to the left (rather than to the right).

has characteristic zero, not

This result implies that you shouldn’t think about elements of

) in practice, even though this is the official definition (and what you’d expect from the name

). The only denominators you need are powers of

is usually not thought of as quotient of generating functions but rather as “formal series with some negative exponents”. You should apply the same intuition on

, connecting it to the wish-list of properties I had before. In elementary number theory you can take equations modulo

, but if you do the quantity

doesn’t make sense unless you know

. You can’t fix this by just taking modulo

since then you need

, ad infinitum. You can work around issues like this, but the nice feature of

is that you have modulo

at once”: the information of

packages all the modulo

information simultaneously. So you can divide by

Up until now we’ve been thinking about things mostly algebraically, but moving forward it will be helpful to start using the language of analysis. Usually, two real numbers are considered “close” if they are close on the number of line, but for

-adic purposes we only care about modulo

information. So, we’ll instead think of two elements of

as “close” if they differ by a large multiple of

For this we’ll borrow the familiar

in the following two equivalent ways:

By convention we set

This fulfills the promise that

are close if they look the same modulo

is large and accordingly

becomes a metric space with metric given by

In fact, these spaces satisfy a stronger form of the triangle inequality than you are used to from

, we have the strong triangle inequality

Equality holds if (but not only if)

is more than just a metric space: it is a field, with its own addition and multiplication. This means we can do analysis just like in

: basically, any notion such as “continuous function”, “convergent series”, et cetera has a

-adic analog. In particular, we can define what it means for an infinite sum to converge:

Here are some examples of

With this definition in place, the “base

” discussion we had earlier is now true in the analytic sense: if

th partial sum is divisible by

While the definitions are all the same, there are some changes in properties that should be true. For example, in

convergence of partial sums is simpler:

converges to some limit if and only if

. You can think of this as a consequence of strong triangle inequality. Proof: By multiplying by a large enough power of

. (This isn’t actually necessary, but makes the notation nicer.)

must eventually stabilize, since for large enough

be the eventual residue modulo

. In the same way let

be the eventual residue modulo

, and so on. Then one can check we approach the limit

is not compact, but

is. (For the latter, I recommend using sequential continuity.)

are totally disconnected: there are no connected sets other than the empty set and singleton sets.

While we’re at it, let’s finally state the

is really a correct convergence in

If you buy the analogy that

is generating functions with base

, then all the olympiad generating functions you might be used to have

-adic analogs. For example, you can prove more generally that:

we have the series convergence

, but it has the properties you expect.) The proof is as in the real case; even the theorem statement is the same except for the change for the extra subscript of

. I won’t elaborate too much on this now, since

-adic exponentiation will be described in much more detail in the next post.

Note that the definition of

could have been given for

as well; we didn’t need

to introduce it (after all, we have

in olympiads already). The big important theorem I must state now is:

is the completion of

This is the definition of

(rather than vice-versa) according to

is a field with

is its valuation ring.)

Let me justify why this definition is philosophically nice.

consists entirely of rational numbers, so the problem statement would be fair game for ancient Greece. But it turns out that in order to get a good estimate, it really helps if you know about the real numbers: because then you can construct the infinite series

, up to some small error term from the terms past

, which can be bounded.

Of course, in order to have access to enough theory to prove that

, you need to have the real numbers; it’s impossible to do serious analysis in the non-complete space

, where e.g. the sequence

, \dots is considered “not convergent” because

. Instead, all analysis is done in the completion of

is a rational number, it still helps to be able to do analysis with infinite sums, and then bound the error term (i.e. take mod

is not complete with respect to

either, and thus it makes sense to work in the completion of

Armed with the generalized binomial theorem, this becomes straightforward. 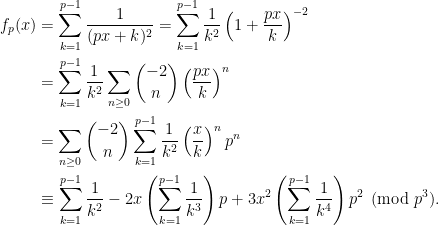 Using the elementary facts that

, this solves the problem.