This was my final paper for 18.099, seminar in discrete analysis, jointly with Sammy Luo and Ryan Alweiss.

We prove that every sufficiently large odd integer can be written as the sum of three primes, conditioned on a strong form of the prime number theorem.

In this paper, we prove the following result:

is the sum of three prime numbers.

In fact, the following result is also true, called the “weak Goldbach conjecture”.

is the sum of three prime numbers.

The proof of Vinogradov’s theorem becomes significantly simpler if one assumes the generalized Riemann hypothesis; this allows one to use a strong form of the prime number theorem (Theorem 9). This conditional proof was given by Hardy and Littlewood in the 1923’s. In 1997, Deshouillers, Effinger, te Riele and Zinoviev showed that the generalized Riemann hypothesis in fact also implies the weak Goldbach conjecture by improving the bound to

and then exhausting the remaining cases via a computer search.

As for unconditional proofs, Vinogradov was able to eliminate the dependency on the generalized Riemann hypothesis in 1937, which is why the Theorem 1 bears his name. However, Vinogradov’s bound used the ineffective Siegel-Walfisz theorem; his student K. Borozdin showed that

is large enough. Over the years the bound was improved, until recently in 2013 when Harald Helfgott claimed the first unconditional proof of Theorem 2, see here.

In this exposition we follow Hardy and Littlewood’s approach, i.e. we prove Theorem 1 assuming the generalized Riemann hypothesis, following the exposition of Rhee. An exposition of the unconditional proof by Vinogradov is given by Rouse.

We are going to prove that

is the von Mangoldt function defined as usual. Then so long as

will be bounded away from zero; thus (1) will imply that in fact there are many ways to write

as the sum of three distinct prime numbers.

The sum (1) is estimated using Fourier analysis. Let us define the following.

denote the circle group, and let

be the exponential function

denotes the minimal distance from

Then we can rewrite (1) using

as a “Fourier coefficient”:

In order to estimate the integral in Proposition 5, we divide

into the so-called “major” and “minor” arcs. Roughly,

These will be made more precise later. This general method is called the Hardy-Littlewood circle method, because of the integral over the circle group

The rest of the paper is structured as follows. In Section 3, we define the Dirichlet character and other number-theoretic objects, and state some estimates for the partial sums of these objects conditioned on the Riemann hypothesis. These bounds are then used in Section 4 to provide corresponding estimates on

. In Section 5 we then define the major and minor arcs rigorously and use the previous estimates to given an upper bound for the integral over both areas. Finally, we complete the proof in Section 6.

As a reminder, the notation

is a complex function and

a nonnegative real one, means

, a statement about the magnitude of

simply means that for some

for all sufficiently large

. It is said to be trivial if

; we denote this character by

By slight abuse of notation, we will also consider

The Dirichlet characters form a multiplicative group of order

under multiplication, with inverse given by complex conjugation. Note that

th root of unity for any

takes values in the unit circle.

. In particular, they satisfy an orthogonality relationship

and thus form an orthonormal basis for functions

The generalized Chebyshev function is defined by

is the constant function

However, the error term in these estimates is quite poor (more than

). However, by assuming the Riemann Hypothesis for a certain “

, and assume the Riemann hypothesis for the

, and is the only place in which the generalized Riemann Hypothesis is actually required.

We will need the following fact about Gauss sums.

We finally require Dirichlet approximation theorem in the following form.

a fixed integer. Then there exists integers

In this section, we use our number-theoretic results to bound

First, we provide a bound for

is a rational number with “small” denominator

Proof: Write the sum as

. To see this, note that

. To bound the sum, notice that

by the orthogonality relations. Now we swap the order of summation to obtain a Gauss sum:

Thus, we swap the order of summation to obtain that 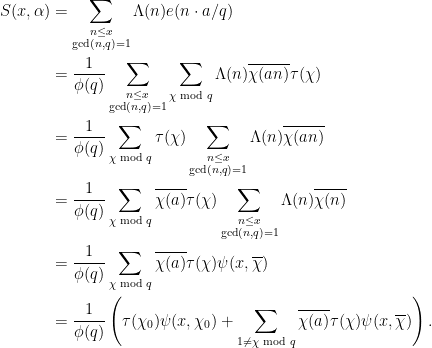 We then provide a bound when

is “close to” such an

Proof: For convenience let us assume 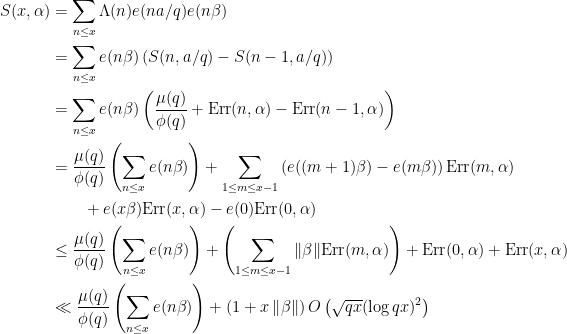 is close to a fraction with small denominator, the value of

is bounded above. We can now combine this with the Dirichlet approximation theorem to obtain the following general result.

5. Estimation of the arcs

for brevity in this section.

Recall that we wish to bound the right-hand side of (2) in Proposition 5. We split

into two sets, which we call the “major arcs” and the “minor arcs.” To do so, we use Dirichlet approximation, as hinted at earlier.

In what follows, fix

These will be the major arcs. The union of all major arcs is denoted by

. The complement is denoted by

is composed of finitely many disjoint intervals

Proof: Note that if

are measurable. Thus we may split the integral in (2) over

it will have large magnitude.

5.2. Estimate of the minor arcs

. Note also that if

as in the last section and

is on a minor arc, we have

As such Corollary 3.3 yields that 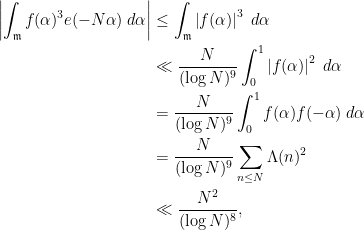 will be negligible compared to lower bounds for the major arcs in the next section.

5.3. Estimate on the major arcs

Then we apply Lemma 14, which gives

Now, we can do casework on the side of

As such, we obtain

in either case. Thus, we can write

This enables us to bound the expression

But the integral over the entire interval is

Considering the difference of the two integrals gives

for some absolute constant

The inner sum is bounded by

are multiplicative functions of 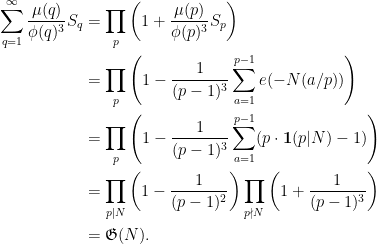 so that we have

Because the integral over the minor arc is

, and for each such

there are at most

. Notice that summing over

is equivalent to summing over composite

where the sum is over primes

. This finishes the proof.