In this post I will sketch a proof Dirichlet Theorem’s in the following form:

be a positive constant. Then for some constant

, we have for any

Prerequisites: complex analysis, previous two posts, possibly also Dirichlet characters. It is probably also advisable to read the last chapter of Hildebrand first, since this contains a much more thorough version of an easier version in which the zeros of

Warning: I really don’t understand what I am saying. It is at least 50% likely that this post contains a major error, and 90% likely that there will be multiple minor errors. Please kindly point out any screw-ups of mine; thanks!

-estimates have absolute constants unless noted otherwise, and

. By abuse of notation,

will be short for either

Here are the main steps:

The pink dots denote zeros; we think the nontrivial ones all lie on the half-line by the Generalized Riemann Hypothesis but they could actually be anywhere in the green strip.

Recall that a Dirichlet character

is a completely multiplicative function

which is also periodic modulo

, and vanishes for all

and thus each nonzero

-th primitive root of unity; there are also exactly

in a natural way: let

except at the points where

be zero at these points instead. (In effect, we are throwing away information about

not induced by any smaller character is called primitive.

The key fact about Dirichlet characters which will enable us to prove the theorem is the following trick:

is the conjugate of

, which is essentially a multiplicative inverse.)

This is in some senses a slightly fancier form of the old roots of unity filter. Specifically, it is not too hard to show that

while it is equal to

Now we can define the associated

The properties of these

The proof is pretty much the same as for zeta.

2.4. The Functional Equation for Dirichlet

While I won’t prove it here, one can show the following analog of the functional equation for Dirichlet

Theorem 4 (The Functional Equation of Dirichlet

is a character modulo

and zero otherwise. Then

is nastier to describe; computing it involves some Gauss sums that would be too involved for this post. However, I should point out that it is the Gauss sum here that requires

to be primitive. As before,

gives us an meromorphic continuation of

in the entire complex plane. We obtain trivial zeros of

Using the trick of orthogonality, we may write

To do this we have to estimate the sum

3.2. Introducing the Logarithmic Derivative of the

as the coefficients of a Dirichlet series. Recall last time we saw that

as coefficients. We can do the same thing with

Taking the derivative, we obtain

(possibly trivial or imprimitive) we have

Now, we unveil the trick at the heart of the proof of Perron’s Formula in the last post. I will give a more precise statement this time, by stating where this integral comes from:

is the indicator function defined by

and the error term

In effect, the integral from

is intended to mimic an indicator function. We can use it to extract the terms of the Dirichlet series of

which happen to have

, by simply appealing to

because later on this would introduce a sum which is not absolutely convergent, meaning we will have to live with the error term introduced by picking a particular finite value of

Let’s do so: define

which is almost the same as

is actually an integer then

should be halved (since

). Now, we can substitute in our integral representation, and obtain

Estimating this is quite ugly, so we defer it to later.

Exactly like before, we are going to use a contour to estimate the value of

be a large half-integer (so no zeros of

). We then re-route the integration path along the contour integral

During this process we pick up residues, which are the interesting terms.

is primitive, so the functional equation applies and we get the information we want about zeros.

at least for primitive characters. Note that the sum over the zeros is not absolutely convergent without the restriction to

(with it, the sum becomes a finite one).

The next step is to notice that if

happens to be not primitive, and is induced by

are not so different. Specifically, they differ by at most 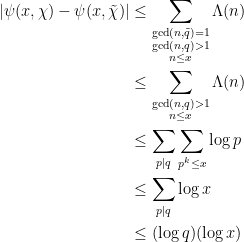 and so our above formula in fact holds for any character

, if we are willing to add an error term of

. This works even if

is trivial, and also

, so we will just simplify notation by omitting the tilde’s.

is piddling compared to all the other error terms in the problem, and we can swallow a lot of the boring residues into a new term, say

and cannot be absorbed. We will also estimate

in the error term party.

In order to estimate

we will need information on both the vertical and horizontal distribution of the zeros. Also, it turns out this will help us compute

is entire. It also is easily seen to have order

, since no term grows much more than exponentially in

(using Stirling to handle the

factor). Thus by Hadamard, we may put

Taking a logarithmic derivative and cleaning up, we derive the following lemma.

For any primitive character

(possibly trivial) we have

Proof: One one hand, we have

On the other hand

Taking the derivative of both sides and setting them equal: we have on the left side

and on the right-hand side

Equating these gives the desired result.

This will be useful in controlling things later. The

is a constant that turns out to be surprisingly annoying; it is tied to

from the contour, so we will need to deal with it.

5.2. A Bound on the Logarithmic Derivative

Frequently we will take the real part of this. Using Stirling, the short version of this is:

be primitive (possibly trivial). Then

Proof: The claim is obvious for

, since we can then bound the quantity by

due to the fact that the series representation is valid in that range. The second part with

follows from the first line, by noting that

. So it just suffices to show that

First, we claim that

. We use the following trick:

where the ends come from taking the logarithmic derivative directly. By switching

Then, the lemma follows rather directly; the

has miraculously canceled with

. To be explicit, we now have

, so it is absorbed.

(in fact it’s all we have!) so this gives the following corresponding estimate:

(the unsymmetric functional equation, which can be obtained from Legendre’s duplication formula). Taking a logarithmic derivative yields

, the tangent function is bounded as

is sufficiently far from any of its poles along the real axis. Also since

term is bounded. Finally, the logarithmic derivative of

according to Stirling. So, total error is

and this gives the conclusion.

be a character, possibly trivial or imprimitive. There exists an absolute constant

with the following properties:

Such bad zeros are called Siegel zeros, and I will denote them

. The important part about this estimate is that it does not depend on

. We need the relaxation to non-primitive characters, since we will use them in the proof of Landau’s Theorem.

is both primitive and nontrivial.

This is cool because we already know that

In particular, we now have (since

So we are free to throw out as many terms as we want.

is primitive, then everything is clear. Let

be a zero. Then

where we have dropped all but one term for the second line, and all terms for the third line. If

is not primitive but at least is not

, then we can replace

for a penalty of at most

is usually zero, so we just look at the differing terms! The Dirichlet series really are practically the same. (Here we have also used the fact that

, initially only for primitive

But because the Euler product of the

it follows that this holds for all nontrivial complex characters.

Unfortunately, if we are unlucky enough that

is trivial, then replacing

causes all hell to break loose. (In particular,

is real in this case!) The problem comes in that our new penalty has an extra

, we get the weaker

term will be at most

and we live to see another day. In other words, we have unconditionally established a zero-free region of the form

. We don’t have the facilities to prove that there are no bad zeros, but let’s at least prove that the zero must be simple and real. By Hadamard at

where we no longer need the real parts since

is real, and in particular the roots of

come in conjugate pairs. The left-hand side can be stupidly bounded below by

The rest is arithmetic; basically one finds that there can be at most one Siegel zero. In particular, since complex zeros come in conjugate pairs, that zero must be real.

It remains to handle the case that

is the constant function giving

. For this, we observe that the

-function in question is just

. Thus, we can decrease the constant

in such a way that the result holds true for

, which completes the proof.

We have the following lemma:

(possibly trivial), we have

Proof: We already have that

, noting that the left-hand side is bounded by a constant

. On the other hand,

From this we may deduce that

Lemma 12 (Number of Zeros Nearby

(possibly trivial), the number of zeros

In particular, we may perturb any given

, for some absolute constant

From this, using an argument principle we can actually also obtain the following: For a real number

is the number of zeros of

. However, we will not need this fact.

has been arbitrary. Assume now

is just to the right of the critical line. This causes

. We assume also for convenience that

We need to bound the right-hand side of

, the log part is small, and this is bad. We have to split into three cases:

. This is necessary because in the event that

is a prime power), then

needs to be handled differently.

be the nearest prime powers to

itself. Thus this breaks our region to conquer into

So we have possibly a center term (if

is a prime power, we have a term

), plus the far left interval and the far right interval. Let

outside the interval mentioned above, we in fact have

had a simple pole at

The sum of everything is

. Hence, the grand total across all these terms is the horrible

We now need to measure the error along the contour, taken from

. Naturally, to estimate the integral, we seek good estimates on

For this we appeal to the Hadamard expansion. We break into a couple cases.

. The first is clearly larger, so we end with

Proof: The idea is to look at

. By subtraction, we obtain

(eliminating the poles), we have

by our vertical distribution results, and similarly

This completes the proof.

be a Siegel zero, if any; for all the other zeros, we have that

. We now have two cases.

Thus, total contribution of the sum is

I am a math olympiad coach and a PhD student at MIT. View all posts by Evan Chen (陳誼廷)

7 thoughts on “Proof of Dirichlet’s Theorem on Arithmetic Progressions”