This is a draft of an appendix chapter for my Napkin project.

In the world of olympiad math, there’s a famous functional equation that goes as follows:

Everyone knows what its solutions are! There’s an obvious family of solutions

There’s also this thing called Zorn’s Lemma. It sounds terrifying, because it’s equivalent to the Axiom of Choice, which is also terrifying because why not.

In this post I will try to de-terrify these things, because they’re really not terrifying and I’m not sure why no one bothered to explain this properly yet. I have yet to see an olympiad handout that explains how you would construct a pathological solution, even though it’s really quite natural. So let me fix this problem now…

and see what happens.

By scaling, let’s assume WLOG that

, and you can easily show from here that

is determined for all rationals. And then you get stuck.

None of this is useful for determining, say,

. You could add and subtract rational numbers all day and, say,

isn’t going to show up at all.

because why not? By the same induction, we get

are rationals. Well, so far so good — as written, this is a perfectly good solution, other than the fact that we’ve only defined

on a tiny portion of the real numbers.

Well, we can do this all day:

You can kind of see how we should keep going now. Just keep throwing in new real numbers which are “independent” to the previous few, assigning them to whatever junk we want. It feels like it should be workable. . .

In a moment I’ll explain what “independent” means (though you might be able to guess already), but at the moment there’s a bigger issue: no matter how many numbers we throw, it seems like we’ll never finish. Let’s address the second issue first.

When you do induction, you get to count off

, … and so on. So for example, suppose we had a “problem” such as the following: Prove that the intersection of

open intervals is either

or an open interval. You can do this by induction easily: it’s true for

, and for the larger cases it’s similarly easy.

But you can’t conclude from this that infinitely many open intervals intersect at some open interval. Indeed, this is false: consider the intervals

This infinite set of intervals intersects at a single point

The moral of the story is that induction doesn’t let us reach infinity. Too bad, because we’d have loved to use induction to help us construct a monster. That’s what we’re doing, after all — adding things in one by one.

Well, it turns out we can, but we need a new notion of number.

For this we need a notion of an ordinal number. I defined these in their full glory a previous blog post, but I don’t need the full details of that. Here’s what I want to say: after all the natural numbers

, representing how large the natural numbers are. After that there’s a number called

and eventually a number called 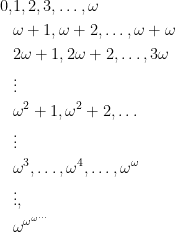 Theorem 1 For every set

which is bigger than it.

But it turns out (and you can intuitively see) that as large as the ordinals grow, there is no infinite descending chain. Meaning: if I start at an ordinal (like

) and jump down, I can only take finitely many jumps before I hit

. (To see this, try writing down a chain starting at

Theorem 2 Given a statement

Similarly, you’re allowed to do recursion to define

if you know the value of

”. But this is not enough to define

. To see this, try using our normal induction and see how far we can climb up the ladder.

Answer: you can’t get

for any of our natural numbers

doesn’t let us hit the ordinal

, even if we already have

. Such ordinals are called limit ordinals. The ordinal that are of the form

So a transfinite induction or recursion is very often broken up into three cases. In the induction phrasing, it looks like

Similarly, transfinite recursion often is split into cases too.

In both situations, finite induction only does the first two cases, but if we’re able to do the third case we can climb far above the barrier

Let’s return to solving our problem.

denote the set of “base” numbers we have at the

until we can express all real numbers. For completeness, let me declare

First, I need to be more precise about “independent”. Intuitively, this construction is working because

is never going to equal zero for rational numbers

(other than all zeros). In general, a set

of numbers is “independent” if the combination

are distinct. Note that even if

is infinite, I can only take finite sums! (This notion has a name: we want

to be linearly independent over

When do we stop? We’d like to stop when we have a set

that’s so big, every real number can be written in terms of the independent numbers. (This notion also has a name: it’s called a

-basis.) Let’s call such a set spanning; we stop once we hit a spanning set.

The idea that we can induct still seems okay: suppose

isn’t spanning. Then there’s some number that is independent of

or something. Then we just add it to get

. And we keep going.

Unfortunately, as I said before it’s not enough to be able to go from

(successor case); we need to handle the limit case as well. But it turns out there’s a trick we can do. Suppose we’ve constructed all the sets

, …, one for each positive integer

, and none of them are spanning. The next thing I want to construct is

; somehow I have to “jump”. To do this, I now take the infinite union

The elements of this set are also independent (why?).

Ta-da! With the simple trick of “union all the existing sets”, we’ve just jumped the hurdle to the first limit ordinal

. Then we can construct

, …, and for the next limit we just do the same trick of “union-ing” all the previous sets.

So we can formalize the process as follows:

How do we know that we’ll stop eventually? Well, the thing is that this process consumes a lot of real numbers. In particular, the ordinals get larger than the size of

. Hence if we don’t stop we will quite literally reach a point where we have used up every single real number. Clearly that’s impossible, because by then the elements can’t possibly be independent! (EDIT Dec 20 2015: To be clear, the claim that “ordinals get larger than the size of the reals” requires the Axiom of Choice; one can’t do this construction using transfinite induction alone. Thanks reddit for calling me out on this.)

So by transfinite recursion (and Choice), we eventually hit some

which is spanning: the elements are all independent, but every real number can be expressed using it. Done! This set has a name: a Hamel basis.

Thus this problem is dead, dead, dead. Any questions?

Now I can tell you what Zorn’s Lemma is: it lets us do the same thing in any poset.

We can think of the above example as follows: consider all sets of independent elements. These form a partially ordered set by inclusion, and what we did was quite literally climb up a chain

It’s not quite climbing since we weren’t just going one step at a time: we had to do “jumps” to get up to

and resume climbing. But the main idea is to climb up a poset until we’re at the very top; in the previous case, when we reached the spanning set.

The same thing works verbatim with any partially ordered set

. Let’s define some terminology. A local maximum (or maximal element) of the entire poset

is an element which has no other elements strictly greater than it.

Now a chain of length

is a set of elements

. (Observe that a chain has a last element if and only if

.) An upper bound to a chain is an element

which is greater than or equal to all elements of the chain. In particular, if

is a successor ordinal, then just taking the last element of the chain works.

In this language, Zorn’s Lemma states that

be a nonempty partially ordered set. If every chain has an upper bound, then

has a local maximum.

Chains with length equal to a successor ordinal always have upper bounds, but this is not true in the limit case. So the hypothesis of Zorn’s Lemma is exactly what lets us “jump” up to define

and other limit ordinals. And the proof of Zorn’s Lemma is straightforward: keep climbing up the poset at successor stages, using Zorn’s condition to jump up at limit stages, and thus building a really long chain. But we have to eventually stop, or we literally run out of elements of

. And the only possible stopping point is a local maximum.

If we want to phrase our previous solution in terms of Zorn’s Lemma, we’d say: Proof: Look at the poset whose elements are sets of independent real numbers. Every chain

has an upper bound

(which you have to check is actually an element of the poset). Thus by Zorn, there is a local maximum

must be spanning, because otherwise we could add an element to it.

So really, Zorn’s Lemma is encoding all of the work of climbing that I argued earlier. It’s a neat little package that captures all the boilerplate, and tells you exactly what you need to check.

One last thing you might ask: where is the Axiom of Choice used? Well, the idea is that for any chain there could be lots of

In the words of Timothy Gowers,

If you are building a mathematical object in stages and find that (i) you have not finished even after infinitely many stages, and (ii) there seems to be nothing to stop you continuing to build, then Zorn’s lemma may well be able to help you.